This is the tale of my quest to answer a tricky translation question from an unexpected person that ultimately ended in a twist no one could have predicted…. I hope you find it somewhat useful, or at least relatable, and if neither of the two, then I hope it gives you a good chuckle.

A couple of nights ago, as I was mindlessly scrolling through the internet in a Sunday-evening stupor, thinking that it was probably time to go to bed but not bringing myself to move unless it was to dodge out of the way of a kamikaze crane fly (summer in Norway is not great for people with an aversion to bugs), my Norwegian partner got a message from his dad asking for a translation of “surleppa”.

According to Det Norske Akademis Ordbok, “surleppa” is the definite form of “surleppe", and commonly used in spoken Norwegian. It gives the definition as “a grouchy expression, made with the mouth; pout”.

This seems fairly sensible as “surleppa” literally translates to “the sour lip”, which I quite enjoy and wouldn't mind adopting into English. However, my partner then elaborated that “å ha surleppa” (“to have the sour lip”) is a neutral expression in the sense that it purely describes the act of sticking your bottom lip out while frowning slightly, as you may do when you're sad, angry, frustrated, disappointed, annoyed, sulky, stubborn, or extremely indignant (see image of me at the top of this blog post).

The reason my partner's dad asked was because he was in a Facebook group with his friends that currently had a Norwegian name (that included the word “surleppa”) and they wanted to know what to call it in English. In the group, they posted pictures of themselves with sour lips, and holding their RC helicopters that they had just crashed into the ground or the side of a mountain moments before - presumably the cause of the aforementioned expression. From their pictures, “surleppa” in this case seemed to express feelings of disappointment or sadness rather than anger or frustration.

I am not at all ashamed to admit that, upon receiving this linguistic challenge from a man who is, for lack of a better word, my father-in-law at around 11 pm on a Sunday evening, my first port of call was every online glossary and machine translation tool I had access to (yes - including Google Translate… take your judgement somewhere else). Only when those resources yielded nothing did I sluggishly reach for my notebook, narrowly avoiding a dive-bombing crane fly, and begin brainstorming.

I considered English expressions such as “to purse (your) lips” or “to stick out (your) bottom lip”, but these felt more appropriate for describing an angry or petulant expression. I thought about adding an adjective to provide that sadness aspect, but realised that this could quickly lead to a longer name than is appropriate for a Facebook group. My partner helpfully chipped in with “sourpuss” but this still wasn't quite right in this context as it's used to describe someone who is being sullen or grumpy.

Eventually, after about ten minutes of thinking, which is a long time at 11 on a Sunday evening, I came up with “The Sad Pouting Pilots’ Page”, and threw in an off-handed “Crashy McCrashface” for good measure, following the age-old British naming formula of thing-y Mcthingface.

Guess which one my partner's dad liked best.

Originally posted to LinkedIn on 13 August 2019. 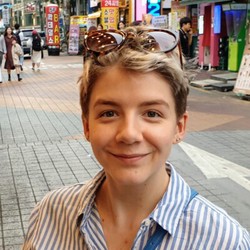 Jessica is a British translator, editor and writer who translates from the Scandinavian languages into English. Her passions include coffee, communications and TV dramas, which conversely means she finds nothing more frustrating than characters in TV dramas refusing to communicate over miniscule misunderstandings (often in coffee shops).